This list of questions is not exhaustive. If you have any other questions please email any authors on the Contact page.

What is Alzheimer’s disease? #

Alzheimer’s disease (AD) is the most common cause of dementia, accounting for an estimated 60% to 80% of cases. Currently, there are an estimated 5.8 million Americans age 65 or older suffering from AD. Difficulty in remembering recent conversations, names, or events is often an early clinical symptom. The hallmark pathologies of Alzheimer’s disease are the accumulation of the protein fragment beta-amyloid (plaques) outside neurons in the brain and twisted strands of the protein tau (tangles) inside neurons. These changes are accompanied by the death of neurons and damage to brain tissue. Alzheimer’s is a slowly progressive brain disease that begins many years before symptoms emerge. Unfortunately, there are no effective therapeutics for the prevention and treatment of the disease. (2020 Alzheimer’s Disease Facts and Figures)

What is single-cell RNA sequencing? #

Single-cell RNA sequencing (scRNA-Seq) examines the dynamic transcriptomic profile of individual cells with next-generation sequencing technologies, and hence provide a higher resolution of cellular differences and a better understanding of the function of an individual cell in the context of its microenvironment. The scRNA-Seq can reveal complex and rare cell populations, uncover regulatory relationships between genes, and track the trajectories of distinct cell lineages in development. The scRNA-Seq is becoming widely used across biological disciplines including neuroscience. More recently, scRNA-Seq has been used in the field of AD and significantly improves our understanding of the pathogenesis of AD at the single-cell level.

scREAD (single-cell RNA-Seq database for Alzheimer’s Disease), as far as we know, is the first database dedicated to the management of all existing scRNA-Seq and single-nucleus RNA-sequencing (snRNA-Seq) datasets from human postmortem brain tissue with AD and mouse models with AD pathology. By manually curating 15 AD-related studies, six scRNA-Seq datasets and 11 snRNA-Seq datasets were retrieved with the following factors well-annotated, i.e., organism, gender, brain region, disease/control, and age information. scREAD re-defines the 17 scRNA-Seq & snRNA-Seq datasets into 73 datasets (in total 713,640 cells and nine cell types), each of which corresponds to a specific organism (human or mouse), gender (male or female), brain region (entorhinal cortex, prefrontal cortex, superior frontal gyrus, cortex, cerebellum, cerebral cortex, or hippocampus), disease or control, and age stage (seven months, 15 months, or 20 months for mice, and 50-100+ years old for human). These datasets have been published and freely accessible in the public domain as of September 22nd, 2020. Furthermore, scREAD provides comprehensive analysis results and interactive visualizations based on all the collected AD datasets. Moreover, scREAD allows users to submit a new dataset to reproduce all the analyses results showcased in scREAD in support of their AD research. It is freely and openly accessible to all users with no login or registration required and no password-protected.

Which browsers are supported? #

The browsers that scREAD supported are Google Chrome, Safari, and Firefox. The scREAD is not supported by the Internet Explorer browser.

Which species are covered in scREAD? #

Which brain regions are covered in scREAD? #

Note: We separated the mouse brain region of cortex from the cerebral cortex because the corresponding datasets used different mouse models.

What are the data sources in scREAD? #

The scREAD contains six human and 11 mouse AD scRNA-Seq & snRNA-Seq datasets that are collected from GEO and Synapse databases as of September 22nd, 2020. The detail information is shown in the following table

How many data files are covered? # 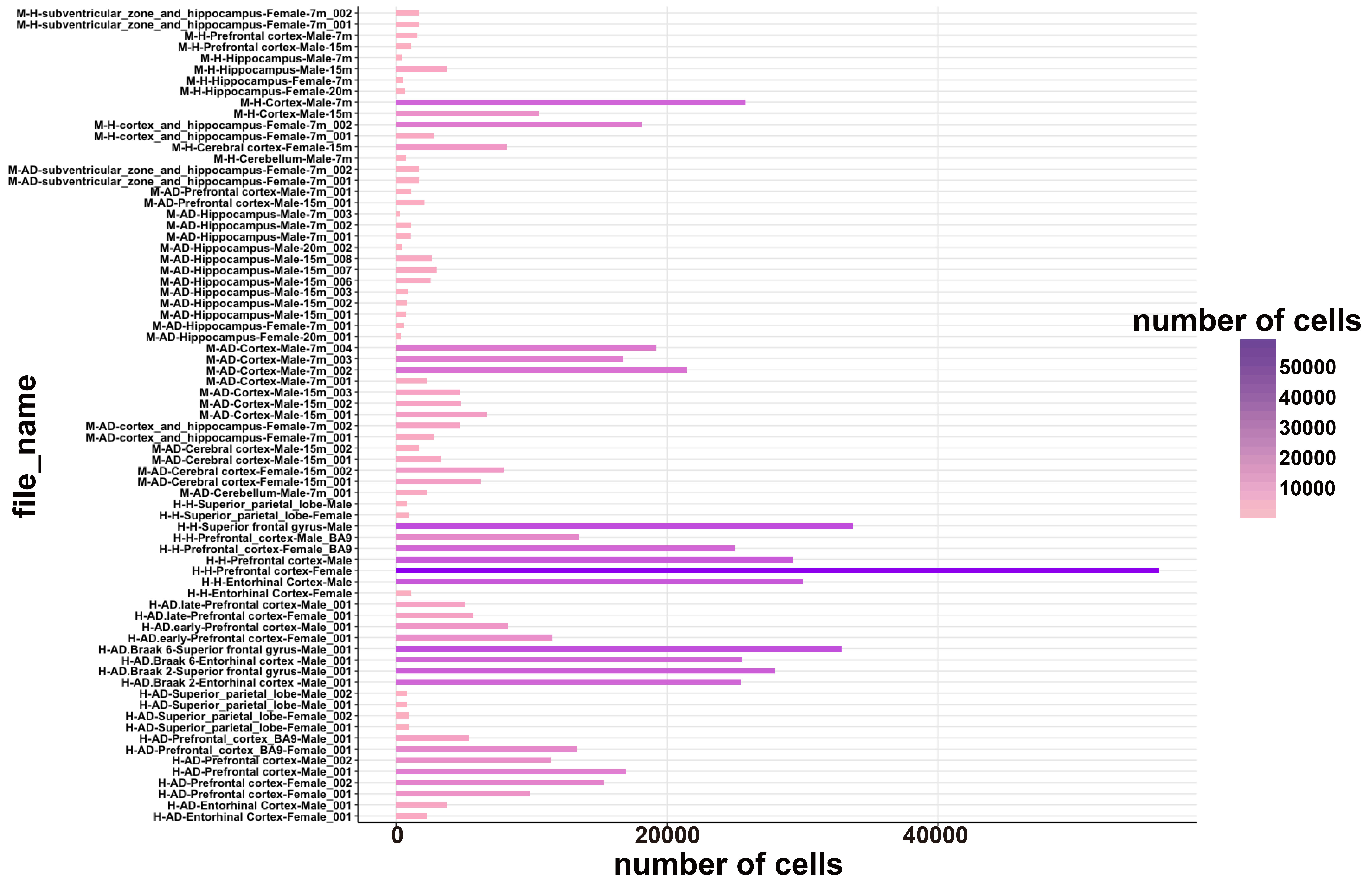 The following figure represents the distribution of the species, gender, condition, and brain region for these 73 files. For each panel in this figure, the color of the bar stands for the number of files, the darker the color is the more files in the corresponding factor. 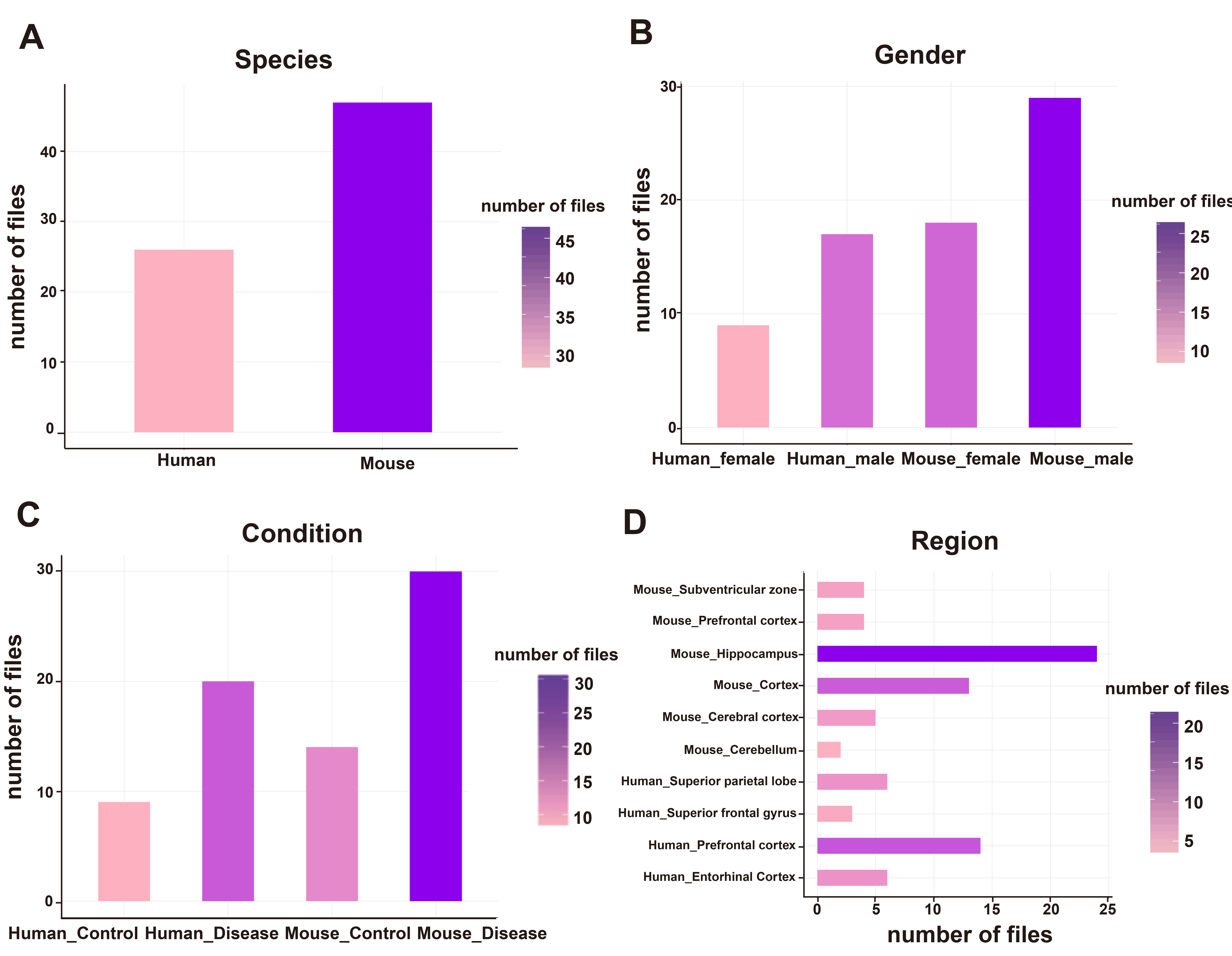 How can we define different mouse age stages? #

What is a control atlas? #

We constructed 23 control cell atlases of human and mouse based on 17 datasets, which cover 10 brain regions, two genders, and three different mouse age stages. Cell types of these 23 control atlases were clustered using Seurat and SCINA based on known cell type markers that collected from literature and PanglaoDB.

How to interpret the control atlas? # 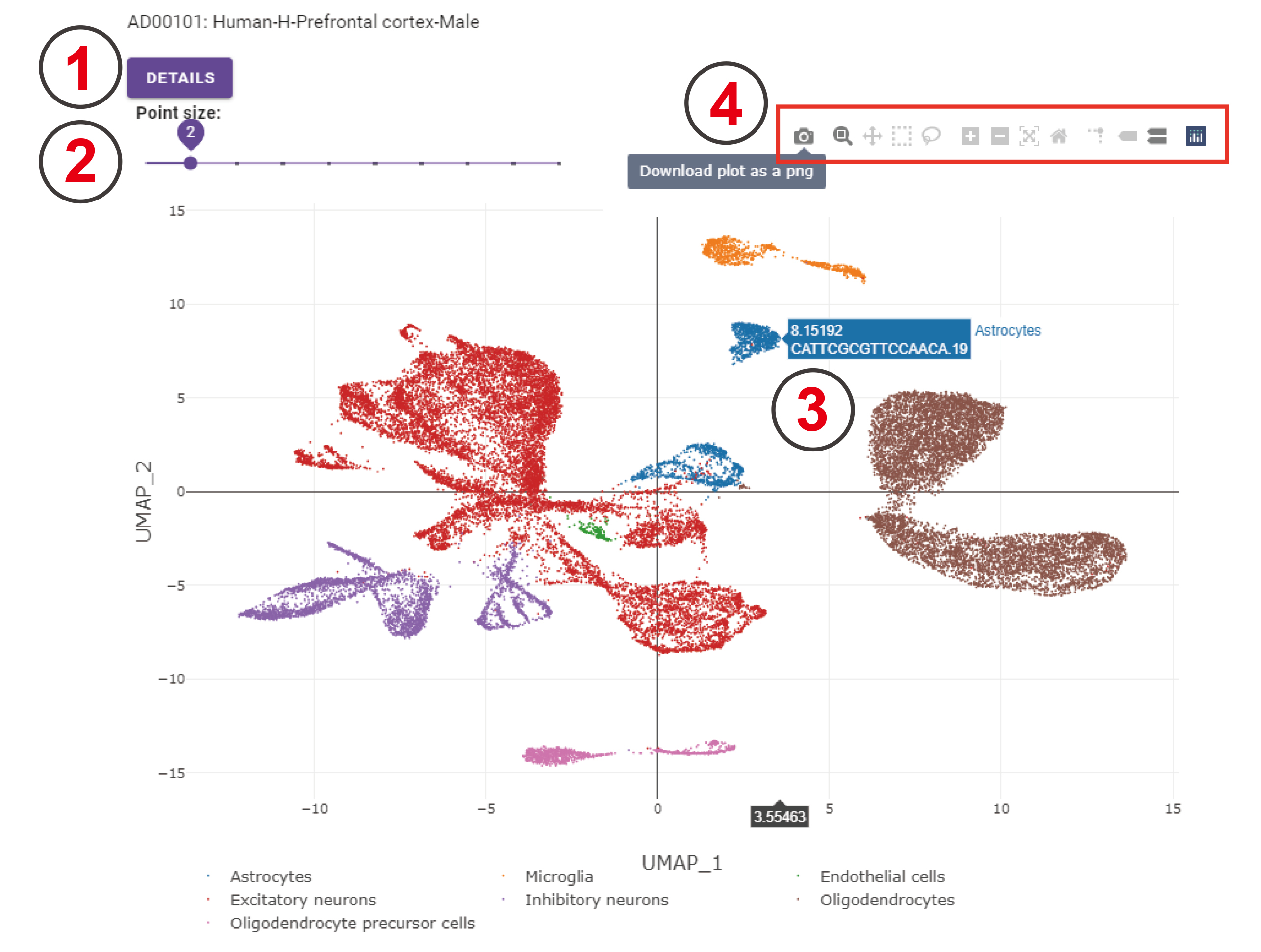 This is the UMAP of control cells coming from the prefrontal cortex region of human male datasets.

Which cell types are covered in scREAD? #

Where can I find subclusters? #

The subcluster information can be found at the ‘Cell Clustering’ part. For each cell type, we have done the subcluster finding analysis.

What are the evaluation indexes for identified cell types? #

What is differential gene expression analysis? #

Note: The comparisons are all in the same gender and age.

What is enrichment analysis? #

What are regulons and cell-type-specific regulons (CTSRs) and why are they important? #

The term regulon was first introduced by Maas et al. in 1964, intended to name a maximal group of co-regulated genes, which may be scattered in a genome without apparent patterns in terms of their genomic locations.Based on that, cell-type-specific regulons (CTSRs) are defined as a group of genes, which receive similar regulatory signals in a specific cell type, hence tending to have similar expression patterns and share conserved motifs in this cell type. A successful elucidation of CTSRs will substantially improve the identification of transcriptionally co-regulated gene modules, realistically allowing reliable prediction of global transcription regulation networks encoded in a specific cell type.

How to interpret the CTSRs? # 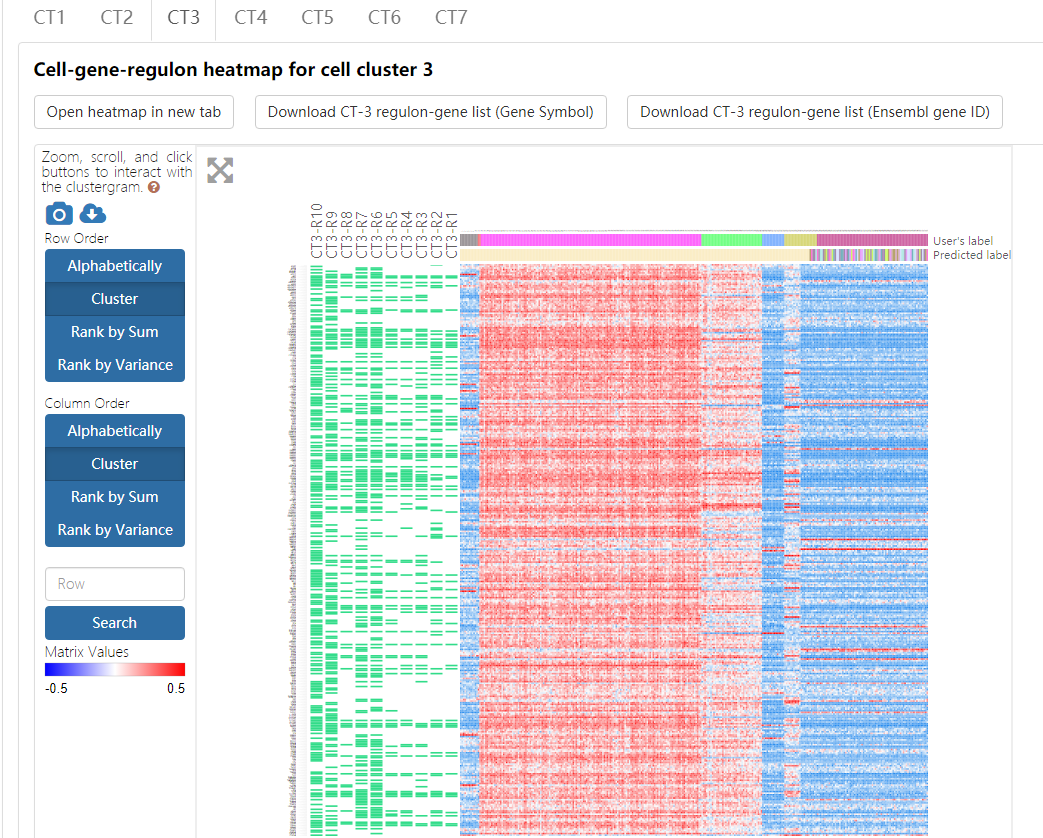 Regulon results are separately showcased in each cell type. Click on the “CT#” button to switch to see results in other cell types. A scatter plot shows the distribution of RSS of each regulon. CTSRs are marked as blue dots with their representative TF names besides, and insignificant regulons are marked as grey dots. Detailed information of each regulon can be found in IRIS3.

IRIS3 (Integrated Cell-type-specific Regulon Inference Server from Single-cell RNA-Seq) is an easy-to-use server empowered by over 20 functionalities to support comprehensive interpretations and graphical visualizations of identified CTSRs. CTSR data can be used to reliably characterize and distinguish the corresponding cell type from others and can be combined with other computational or experimental analyses for biomedical studies. CTSRs can, therefore, aid in the discovery of major regulatory mechanisms and allow reliable constructions of global transcriptional regulation networks encoded in a specific cell type. The broader impact of IRIS3 includes, but is not limited to, investigation of complex diseases hierarchies and heterogeneity, causal gene regulatory network construction, and drug development. IRIS3 is freely accessible from https://bmbl.bmi.osumc.edu/iris3/ with no login requirement. More information about this paper can be found here.

What are the input files of the scREAD? #

The required input file is a gene expression matrix with three acceptable formats, compressed files are encouraged to decrease the uploading time.

How to interpret the file names? #

The file name is composed of six parts, they are species, condition, region, gender, age, and code numbers based on the string order of the file_name. Here are two examples showing how to read the file_name column:

Note: For control datasets across different brain regions with different genders in different species, each of which corresponded to only one file, so it doesn’t have any code_numbers here.

How to interpret the data_id? #

The data_id name is composed of three parts, they are Alzheimer’s disease (the two letters), the region of different species (the first three numbers), and code numbers (the last two numbers). Here are two examples showing how to read data_id:

Here is the table showing which brain regions are the first three letters corresponded to:

What is fst format? #

Multithreaded serialization of compressed data frames using the ‘fst’ format. The ‘fst’ format allows for random access of stored data and compression with the LZ4 and ZSTD compressors created by Yann Collet.
You can see more information about Package ‘fst’ here.

Where does scREAD store the data uploaded by users? #

How can I submit my AD scRNA-Seq data to scREAD to do an analysis? #

The users can submit their AD scRNA-Seq dataset as well as the corresponding control dataset to scREAD to do all the analysis through Submit page.

Where can I find the source code? #

The source code of scREAD can be accessed on GitHub.

The datasets of scREAD can be downloaded from Download page.

What are the future plans of scREAD? #

What computational tools are used in scREAD? #

Why does scREAD use PCA instead of CCA or LSI for the dimensional reduction in the identification of disease dataset cell types? #

In the identification of disease cell types, we used Seurat’s FindTransferAnchors and TransferData function to transfer cell types from the control atlas to disease datasets, which project PCA structure from the query (disease dataset) onto the reference (control atlas). PCA is recommended when reference and query datasets are from scRNA-seq. CCA is considered better captures the shared feature correlation structure across single-cell modalities. LSI is considered better captures the ‘internal’ structure of ATAC-seq data in the case of scRNA-seq to scATAC-seq transfer.

What is the scREAD overall pipeline? #

Our database organically integrates multiple state-of-the-art tools, including IRIS3, SCINA, Seurat, and IRIS-EDA. These tools are either reputed or have been justified with the best performance in the analytical area.

Human and Mouse control atlases come from the 15 scRNA-Seq & snRNA-Seq studies. Genes detected in less than 3 cells and cells detected in less than 200 genes were filtered out. Principal component analysis (PCA) was performed to obtain a small number of principal components, 25 PCA components were used as input of Uniform Manifold Approximation and Projection (UMAP). Initial clustering was performed using Seurat’s v3.1.5 SNN graph clustering using the FindClusters function with a resolution of 0.8.

SCINA is an R package that leverages prior marker genes information and simultaneously performs cell type clustering and assignment for known cell types, SCINA shows top performances among prior-knowledge classifiers when high-quality marker genes were provided. Each cell was assigned a cell type based on a manually created marker gene list file using SCINA v1.2.0, the cells with unknown labels marked by SCINA were first compared with predicted clusters from Seurat, then the unknown labels were assigned to the most dominate cell types within the predicted clusters.

2. Identification of Human and Mouse disease cell types based on the control atlas #

To determine whether cells from disease datasets are control-like, Harmony R package v1.0 was first used to integrate the disease dataset with its corresponding control atlas. Harmony shows similar ARI scores but having a significantly shorter run-time compared to other data integration tools. After the integration, cells were clustered using Seurat FindClusters function with a resolution of 4. A hypergeometric test was performed for each cluster using the number of cells from disease cells and the number of cells from the control atlas. Clusters were considered to be control-like if the hypergeometric test result was significant (p-value < 0.0001, Benjamini-Hochberg adjusted), and the cells from the disease dataset in control-like clusters were removed from the downstream analyses.

For the remaining disease cells, Seurat’s FindTransferAnchors function was used to find transfer anchors using PCA to project the control-atlas onto the disease dataset. Cell types were transferred using the TransferData function with PCA embeddings as the weighting anchors. The subclusters for each cell types were designated using Seurat FindClusters function for all cells in each identified cell type with a resolution of 0.8.